Friday the 20th of March 2015 is a special day for the friends of the Spectacular, who have made a note of themselves in the calendar. Around noon, a crowd of people from all over Schleswig-Holstein and the surrounding area gathered to attend the unusual event. 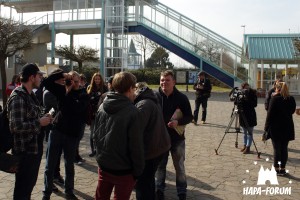 At 10:30 am, the moon darkened 80% of the sun over Germany's north. It could hardly be more spectacular on this day, if not for this small group of amusement park fans would have set off, in the tranquil little seaside resort Sierksdorf. Both the invited fan clubs and amusement park fan pages, as well as the fans in front of the screens eagerly awaited the start of an unusual event. Just over a week ago, the information that HANSA-PARK had invited to a site inspection penetrated through the Internet forums and social media. Representatives were sent to detail the construction site of KÄRNAN and its progress. 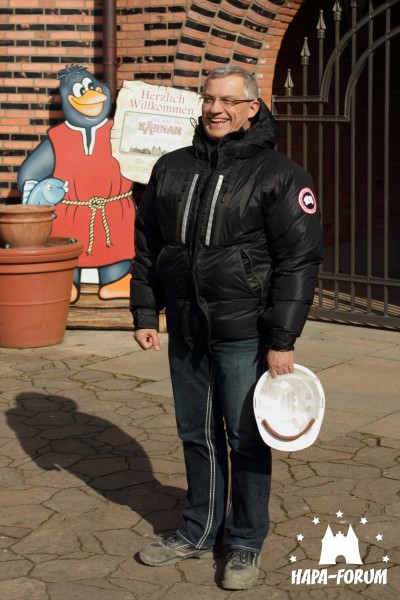 At 14:00, CEO Andreas Leicht and his team received the group waiting in front of Holstentor, consisting of regional and international fan club members, emissaries of some roller coaster and amusement park portals plus a press crew from television, radio and print media. The weather was disastrously good, and the eclipse was already forgotten. With a few first words Mr. Leicht fired the curiosity only further. At the beginning, the Karwanne was circling the log cabin, which had been significantly renovated. Roofs were re-covered and old wood replaced by fresh ones. The lumber camp is just shining in the light of the sun. The Old Fair was also heavily overhauled and green space maintenance is underway.

In the western town of "Bonanza City" the guests then received an impressive view of the support structure of the heart element. Just one-third of the height of the globally unique Hochfahrfigur has been built so far. And due to the ongoing construction work, a stop was used shortly before the saloon. Mr. Leicht explained that without personal protective equipment (PPE), it was not allowed to enter the construction site. The protective measures are taken very seriously at HANSA-PARK. A falling bolt, especially in the current work, could be extremely dangerous. Fortunately, the HANSA-PARK team has found a cornucopia of construction helmets, which were promptly distributed among the attendees. Last security information is pronounced and it goes on to the future "Kungstorget", the Königsplatz. 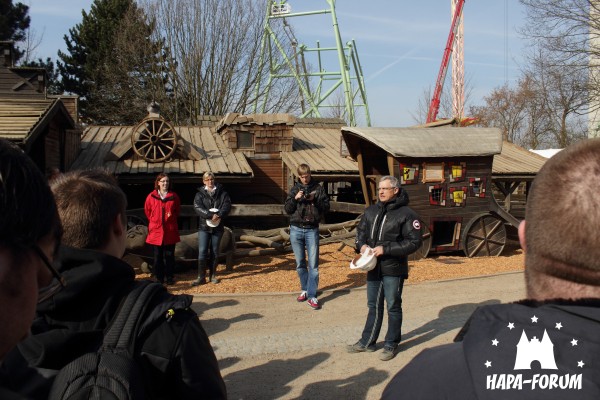 The well-known Plaza San Antonio, just behind the Arena del Mar, between the Fort Alamo Saloon and the Reetdachkate, will be redecorated with the completion of the 2016 theme of Königsplatz. The Danish King Erik VI, who had allegedly commissioned the construction of KÄRNAN, erected a large statue in his honor on the square. From here King Erik VI. keep his KÄRNAN and the goings-on in mind. More was not revealed about the story. Only so much is said that the subheadline "Beware of his spell" is to take seriously, and later in the station a free choice of space is not possible, but will be determined by the ban.
The rollercoaster exit will be on the ground floor to the Kungstorget side, while later you will reach the entrance via a drawbridge and a path along the outer battlements. This path leads to the terrace of the castle which is one floor above the ground level. From there, a staircase leads down to the inside of the castle. There the guest will expect several 16 seated trains, which will be decorated with wooden gears and waves. What meaning these details will have, Mr. Leicht will not tell you yet. Once you have climbed one of the trains with its ergonomically adapted pelvic braces, the ride begins with two wide curves across the course with a crash into the basement, from where the train reaches the base of the KÄRNAN tower in a final left turn. From here, the train climbs over a chain lift the nearly 70 meters difference in height to top the edge over the edge in a twisted right to 67 meters deep descent. In warm weather, the train reaches the 127 km / h. In addition, in addition rainy weather, the train also creates up to 130 km / h, with which he rushes to the approximately 60 meters start-up element in the form of a heart. At the level of the Pow Wow it goes up to the first triangle tower on which the rail swings back into an upright position. About the huge bridge construction, the vehicle drives in an S-shaped departure and driveway over to the second triangle tower which is located near the KÄRNAN to turn back down to earth to make a U-turn. From there, head towards the Crazy Mine through a twisted bend over to Miner's Camp. From then on, the Hyper-Coaster becomes a terrain coaster, a roller coaster whose course adapts to the environment and drives very close to the ground. This means a lot of high speed and through several small hills a lot of airtime, the feeling of taking off. Arriving at the Barracuda Slide, the train goes into a wide right turn towards the Viking boat ride. Over the railway bridge to the foothills of the carp pond. Along the bank, the coaster again turns in a long curve, only to rush back to the Barracuda Slide. The route leads back in a left turn past the waterslide across the lake, parallel to the previously worn track, over the Miner's Camp past the Crazy Mine. The final spurt takes place under the heart element, past the remaining hopping mountain and into the long-drawn reduction brake. As the journey slows, the train heads for the castle building and disappears on the top floor.

External Content www.youtube.com
Content embedded from external sources will not be displayed without your consent.
Through the activation of external content, you agree that personal data may be transferred to third party platforms. We have provided more information on this in our privacy policy.

Mr. Leicht took a lot of time to answer the questions. He answered some in advance, because he was in the picture about the discussions in the fan forums. If e.g. on the tower still right battlements attached. However, Mr. Leicht did not want to talk about the costs. It has agreed with the manufacturer secrecy. Therefore, only so much, it will be a total of tens of millions. For the other questions, Mr. Leicht spoke very openly and freely. Yes, even before the start of the season, the finished crenellated crown will be placed at the head of the tower, as it would be too complicated to carry out this work during or after the season. Once again, a 100-meter-high crane will be on display in the park. This will then thread the heavy chain of the lift from above via a roof lug in the tower. Then the lift is complete. About the inversion in the dark, Mr. Leicht told only so much that after the Reduzierbremse and the entrance into the building some supports were to be seen, which have over-inclined flanges. "This could indicate that the train will turn there," said Mr. Leicht. 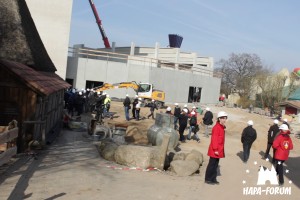 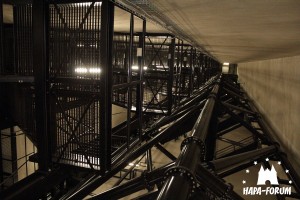 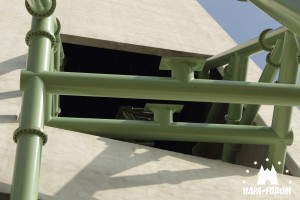 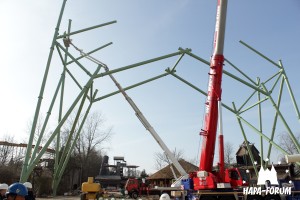 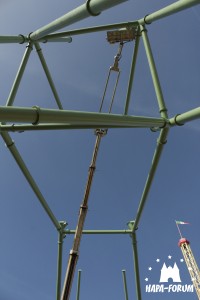 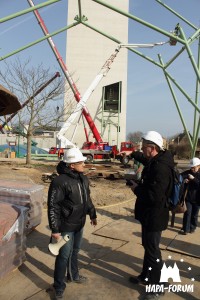 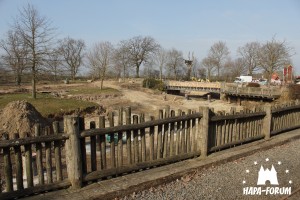 The remaining questions were later answered in the large conference room of the administration building. But before the presentation, attendees could take a look at the emptied carp pond and its stuck drill pipes, as well as at the expansion area with a tangle of columns and rails. Some would have liked to be photographed with the rails. But this wish should remain unfulfilled.

This was compensated with coffee and a richly filled cake board. New creations from our own confectionery were served. Below it is a KÄRNAN tart, decorated with a chocolate bar and the KÄRNAN symbol on it.

While coffee and cake were enjoyed, Mr. Leicht explained in a Power Point presentation once again the facts which can already be read in the Baublog. When a two-dimensional view of the KÄRNAN layout appeared on the screen, the sounds in the conference room died away noticeably. An observable statics drawing of the pillar foundations could be seen. Some were framed with cloud symbols. On the basis of these clouds Mr. Leicht told, one can recognize at which points the statics are very elaborate and the construction heavily loaded. In addition to the tower and the heart element, the elevated curve at the Crazy Mine and the U-turn on the banks of the Viking country were also marked. For this reason, the foundations are so pronounced in these places, in the form of cooking and triangular foundations.

And on the next page of the Power Point presentation was finally a 3D graphics of the layout to see and how it will fit into the existing landscape. Finally, Mr. Leicht presented some pictures and artworks of the trains and theme elements. Among other things, a wooden porch is planned which should be installed at the height of the exit on the tower. In the past, this so-called hurdle served the castle guards to defend the base of their castles without being endangered. Because in the bottom of these bay windows openings were let in by which the defenders could drop stones or could spit out hot liquids. Such a hurdle will later decorate the KÄRNAN tower and hide the exit opening a bit.

After three very exciting and informative hours, the event finally came to an end. Gradually, the participants left the park area to make their way home. Many interesting picture and text reports have been published since then and also provide great insights into KÄRNAN and his secrets. Look over there too.

The HANSA-PARK has put on a really great event and performed very confidently. Many thanks to Mr. and Mrs. Leicht, to Mrs. Seecker and Mrs. Heik as well as the whole team of the park which accompanied us on this day and answered questions. And we wish the park the success that the oath of KÄRNAN deserves in any case.

This site uses cookies. By continuing to browse this site, you are agreeing to our use of cookies. More Details Close